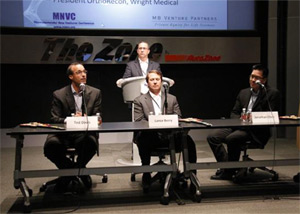 But the event will also address two of the most important issues for medical device startups: raising capital and the regulatory environment.

“It’s probably at historic lows,” Stevenson said of capital investment. “Biotech has been hot, but there’s no tax on them. Corporate investors have had to fill in the gaps to some extent that us venture capital firms have left.”

“They’re more excited about technologies that have proven themselves through sales,” Stevenson said. “In 2008, the spine industry was very frothy, and companies were making acquisitions of companies that hadn’t been approved yet.”

Stevenson says one thing he hopes startups learn at the conference is the importance of building a business as opposed to planning to be acquired by a larger corporation.

Meanwhile, companies such as Medtronic and Wright Medical have completed mergers with Covidien and Tornier N.V., respectively. Medtronic moved its headquarters to Ireland, where Covidien is based, a move widely seen as a way to avoid the excise tax.

“We tell every company we’ve invested in to keep their heads down, build a business and make sure it’s self-sustainable, so you’re not relying on anyone to bail you out,” Stevenson says. “The big companies have taken their eyes off the ball of acquisition of smaller companies. We hope they get over these distractions and turn their attention back to innovation.”